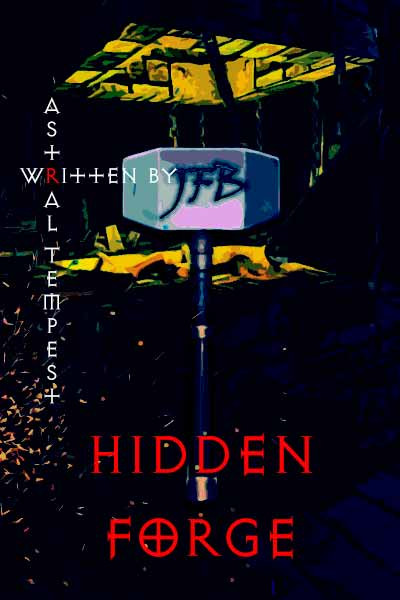 A portal to a new world. The forge that gives way to a new life. A journey of a lifetime. Do you take it or do you continue your ordinary nine-to-five job day in, day out? For AstralTempest’s MC, Ian Hayes, it was a no-brainer and I’ll give you the opportunity to do the same. Take this key: [Key] and open the door to a new adventure.

Q: Continuing our weekly interview series, today I am joined by one of our older creators, AstralTempest, author of Hidden Forge: Lucem Ac Tenebras. Mind introducing yourself?

A: Well, I’m an author and musician. I read many novels while growing up and always loved a good story. Eventually. I became inspired to actually write back in high school when I first watched Code Geass. I immediately desired to create a compelling narrative with interesting characters. For several years it was a simple hobby, but last summer I started posting online and ended up taking it even more seriously.

Q: I’m curious about it, but what is the origin of the name “AstralTempest”? It doesn’t sound like something you’d pick from thin air.

A: Uh… is there a punishment if I say that’s exactly how it came to me? If I’m honest, though, I think it was back when I first read Slime Datta Ken or whatever it’s called and liked the idea of the tempest family name of the dragon. No idea how I decided on Astral, though. I guess it just sounded good or something.

Q: Interesting. Well, moving on, you’ve been writing on CN for over a month now. For those who didn’t know, mind giving them an overview of the story?

A: Basically, a young man is weighed down by his past and ends up able to traverse between Earth and a world filled with magic called Regnoras. While there, strives to become a magic blacksmith but stumbles upon all kinds of trouble later on.

Q: From what I have gathered, the version you post on CN is actually a rewrite. How does it differ from the original and what made you decide to rewrite in the first place?

A: A lot of the early details have changed, the grammar is improved, I dropped most of the info dumps, changed some aspects of certain characters (especially the antagonists), and, most of all, the upcoming third arc is going to undergo a major overhaul in terms of its events. I decided to do the rewrite because I had improved so much by the time I finished book one. I wanted to change some details and improve the overall narrative.

Q: That must be difficult. What sort of hardships have you suffered from the rewrite, or writing the story in general? Any good stories to tell?

A: Well, my biggest obstacle was starting a second story that became three times as popular almost overnight. Balancing the two is difficult, but I believe it is totally worth it, especially when considering the Easter eggs from Hidden Forge contained within the second story.

Q: Any tips for inspiring authors?

A: That’s… a really loaded question. I guess if I had to narrow it down, never think you’ve arrived at the nirvana of writing or that you’ve become like the Buddha of authors. There will always be areas for you to improve. Oh, and learn when to distinguish between helpful and toxic criticism. On top of that, never give up on writing. There will always be room for another good story on the shelves. Man… I could go on about this subject all day…

Q: You sound like someone who’s developed a quirk or habit while writing. Is this true?

A: Did you want me to tell you what it is?

Q: Every other interviewee has done so.

A: Very well, I suppose I shall grace you with a few of my quirks. One, I never write without instrumental music playing in my headphones, usually from Epic Music World. Two, coffee; lots of coffee. Three, acting out scenes my characters are in (I play every part. Every. Part.) Four, research…

[He then does a perverted face, sending a shiver down my – the interviewer’s – spine]

Q: Thanks. Oh, I believe I’m running out of time. To end things off, how about telling us a joke.

A: The Justice League movie.

Q: I know that feel. Doesn’t help that I watched Infinity Wars before that.

A: Same. I also watched Deadpool before it too…

Q: Ouch. Anyway, that’s it for the interview. Thanks again for joining me, AstralTempest. I have added the link to his story below, so I hope the audience will check it out too!