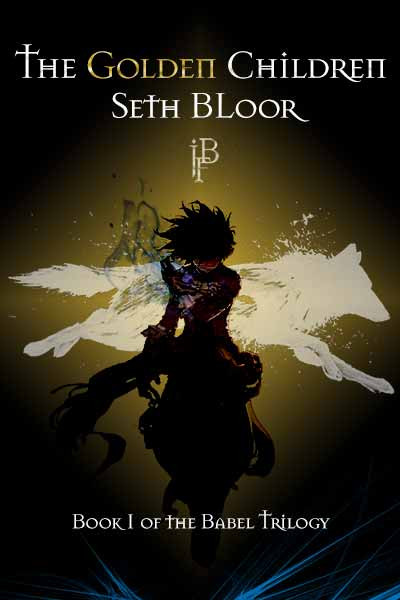 Welcome Everyone! Please sit down. Now, you may be wondering who I am. Some call me Verbiage Demiurge Hira , while others call me Seth. However, that is unimportant. No, I have called you here to ask a question – a simple one at that. Don’t worry, I won’t take too much of your time.

Answer me this: If you could have one wish, what would it be? Fame? Riches? Immortality? What if I said this is all possible? There’s one tiny, almost negligible, catch though. You just need to do a simple task: enter this gateway and overcome all the obstacles in your path. Nothing too taxing, I promise. Interested? Grab this link and our story shall begin.

George Bakerson, marketing interviews Hiraruda on his first installment of his Trilogy to Creative Novels, The Golden Children.

Q: Good day everyone! Today I am joined by a very special guest and future author on CN, Seth Bloor. I say this because – Actually, I’m getting ahead of myself. I’ll allow Hira to introduce himself first.

A: Hello! My name is Seth, or Hira. I come from bright, sunny England, and am an avid gamer.

Q: The reason I called him special earlier on was because he’s the first author on CN to have published his novels in e-book form before. What made you decide to join CN even after making the breakthrough most haven’t?

A: Mostly because I’m god-awful at marketing. I have many weak points, but that is my weakest. It was an opportunity, and I’m glad I’ve been given the chance to take it.

Q: You’re posting your third novel, Hephaistia, on CN. I believe it follows on the previous two novels you’ve published. Mind telling the audience a brief summary of what happens in those two?

A: Well, the first two novels will be being released on here as well, with this Friday’s release being my first book, The Golden Children. The first novel primarily follows a boy called Laurence as he climbs a mythical tower in order to attain immortality. Each floor of the tower is an entire world, and between each floor is a resting point, guarded by an Immortal who often in their boredom thinks up a way of testing their guests and cutting down the volume of climbers through often fatuous means. His journey begins as a young child who is captivated by a magical book, one which turns out to be a book that teaches and instructs people in the fundamental nature of reality known as the Book of Creation. Through this journey he gains friends, enemies, and experiences things that no child should ever have to, which changes him.

In the second book, Heaven, Laurence is a teenager, and has learned to cope with most of his mental quirks through the help and support of his friends. He has decided to continue his journey up the Tower, but all the while powerful figures are moving in the background, attempting to reshape the status quo of the Tower itself. Laurence is inexorably linked as he is one of the only people within the Tower to carry the missing Book of Creation, and this makes him a target. I can’t really say more without spoiling it!

Q: Great! And how does the third follow on from them?

A: The third book follows on a cycle (an indeterminate amount of time dictated by major events within the Tower itself) later. Laurence is a haggard man. He has been broken and tormented by the ending of the events in Heaven, and his entire journey is his own desperate attempt to fix his greatest mistake. He is joined by a litany of familiar faces as the plans of the various factions within the Tower that have been moving all this time come to fruition.

Q: Of course, thinking up all of this takes a lot of creativity. Did anything/anybody inspire you in the process?

A: Well, people often compare my novel to Tower of God, the manhwa series by SIU. While I welcome the comparison, as I think ToG is amazing and am a fan, the stories are very different beasts, and their differences are apparent quite early on. My other influences are (kind of obviously) Xianxia and Xuanhuan novels because I love the concept that learning about the world makes you stronger and how beautiful some Daoist symbolism actually is. I’ve read a lot of manga, western Fantasy, Sci-Fi, Horror and Pulp-P.I. novels, and all of those have had some impact upon my storytelling, but the big decider for this story is probably still my recent obsession with Xuanhuan.

Q: It goes without saying that you must have experienced a lot while writing all of this. What advice can you give to aspiring authors?

A: Don’t give up, no matter how stupid you think things are. Also plan your writing. Seriously plan your writing. There was a time back when I first started writing The Golden Children where I didn’t have much fleshed out, and the world is worse off because of it. The lack of planning has given me so much more work on the back end of this trilogy than any person should ever have to deal with.

Q: Now, I love this question as it gives such a variety of answers. Have you developed a quirk or habit while writing and, if so, what is it?

A: PLAN EVERYTHING. I have a wall by where my PC is set up that is covered in post-it notes with writing bits and pieces on them. I have about seven filled notebooks with plans that I’ve written while travelling, maps that I’ve drawn, character portraits, monster designs, pieces of lore nobody but me will ever see, poems written by in-story characters that I reference in one line in one chapter that most people assume was a throw away piece of fluff. The more you plan, the more real the world becomes, and the more your writing benefits because of it.

Q: Tell us a joke

A: Once upon a time, there was a man who wanted to build a house. But, being a little eccentric, he wanted to build the house using only 99 bricks. So he went to the hardware store and said to the owner of the store, “Hello, I’d like to buy 99 bricks.”
The owner of the store told him, “I’m sorry, we only sell bricks in quantities of 100.”
“Can’t you cut me a deal or something?” the man asked.
“Nope, sorry,” replied the owner. So the guy bought 100 bricks.
He took the bricks back to his lot, and he built a house using 99 bricks. Now, if you do the maths, 100 minus 99 is 1, so he had one brick left. He took that brick, and he just chucked it, way up in the air!

A guy was riding on an airplane, and he decided to smoke a cigar. Unfortunately, he was sitting next to a woman with a dog. The dog began coughing, so the lady said, “Excuse me, sir, but could you please put out your cigar? It’s really bothering my dog.”

He angrily replied, “No, I won’t! You shouldn’t have a dog on this flight anyways!”

“This is a non-smoking flight! You need to put that cigar out!” she said. They argued back and forth… get rid of the dog, put out the cigar, and so on.

Finally, the man said, “Look, I’ll compromise with you. If you get rid of your dog, I’ll get rid of the cigar.” HE was thinking, “She’ll never want to give up her dog.” But much to his surprise, she agreed to the deal!

However, the woman suddenly reached out the window, and grabbed her dog’s leash! As she pulled the dog back in, she was thinking that she’d won, but do you know what the dog had in its mouth?

That’s it for the interview. Thank you for joining me and I hope your novel is a great success!