They went around the town and listened to people; they needed to gather information about the area. They had the records they could find on the web, but now they couldn’t access them there.

There was a being or a creature that Tom didn’t recognize on the portal. He asked his friends, but they were in the same situation. And the rest of the people didn’t pay much attention to it. When he asked, they told him there was one in all the portals.

As he walked, he noticed that some people were taking food from his bracelet. Her friends saw it too, and Sarah went over to ask.

– We can keep the food that exists in this world on the bracelet, plus other objects as well. It doesn’t apply to the things we have from Vyndra. – reported Sarah when she returned.

Tom and Aiden nodded at the same time. They had some backpacks on them and a tent. They may be more substantial than a normal human being, but they would still get tired. So it relieved them to know that their burden would be less than expected.

– So we went out to explore the surroundings,” Aiden asked.

– Yes, it looks like we can buy some things if you want. When we run out of what we brought with us, some more food would be ideal; let’s do that first and then go out.

They immediately went to do that, while their creatures followed them. They said nothing while their companions were discussing what to do. They were feeling this world; there was a kind of sense of connection to this earth that was difficult for them to express. They instinctively felt that here they would become stronger if the conditions were right.

The creatures could do what the Gifted did after their awakening, naturally. Thanks to that way of perceiving reality, they could realize those fantasy abilities they had when they were only virtual beings.

And so he spent his first time in this world. Nothing in particular happened. They saw creatures but did not confront any of them; to be more specific, those who fought were their companions. They gave their creatures absolute freedom to move around them and made sure that none of them approached the children.

So they relaxed quite a bit. Each day they moved toward the portals near the town they arrived at and updated their map as they went along.

These were peaceful days for them, where their relationship became closer. Although there were some problems with living together, the training they received at the school had ensured that they could be together as a team. They knew aspects of each other that they had never disclosed.

Tom took care of most of the meals. When they could prepare something elaborate, he always rationed everything to have food for the entire trip.

Sarah naturally led them; it was her unspoken role. Sometimes she would separate from the group and investigate the area and see how far the game-like characteristics found in this world or reality would go. Like all gifted people, Sarah did not have much contact with video games. She needed to learn to control her gift from the moment they realized her ability. So she discovered that she had a lot of fun learning about what surrounded her in this world.

Aiden and Adolf were to set up the tents, although they only had to watch where they placed it while it was inflated and set up by itself. Besides following Sarah’s directions when necessary.

They stopped near a river when they reached the portal. Although the clothes had a function adapted to the outside temperature and covered the smells, that didn’t stop them from feeling dirty. So they arranged the things they had and jumped into the water to cool down.

– I’m going to try to fish,” Tom said after seeing some fish swimming near him.

It surprised him to see that they were of species brought to Vyndra by humans and raised in enclosed spaces. He knew that the game developers that originated the Singularity were humans, so he believed that they somehow related it to that. This made it more difficult to understand how this plane could exist.

He fished using the needles they brought along in case they had to fight. While his territory was considerably more extensive since the awakening, it was nothing compared to the gifted ones born in Vyndra. But his gift was unique, and he could move his weapons out of their domain, unlike the gifted “normals.

It was strange that every time he used this feature; he felt parts of his body fall away from him; he could compare it to the sensation of pulling out hair by force.

First, he tried to throw them as projects, but he couldn’t get them right; an hour later, I got some right, but they weren’t enough for everyone. So he changed the way he caught them, so did it underwater and chase them until and stuck the needles in them, it wasn’t easy to control the needles in the water, but he knew that this training was good for him.

Since Tom fished, the others started preparing things to cook whatever he caught. Although they would leave the cooking to Tom, since he was the one who knew how to do the most items, once they got things ready, everyone started practicing individually.

As for the creatures, Lessar watched the camp, this time with Yuan and Bira, who were swimming happily in the river.

Bronk, Sharp, and Keen split up in different directions, and each went to sharpen their swords hunting creatures. Drako and Iska were together doing the same.

Drako was overseeing Iska’s battles; he had not yet found a suitable opponent for him.

One who would demand more from him, in the subsequent fights, discovered that when he killed, particles emerged and impregnated his body. And the next thing was a little strengthening of his body.

He instinctively knew that if he consumed a creature stronger than himself, he would become more potent.

Iska was fighting a wild ape-like creature, quite muscular, had some purple feathers, and moved fast through the trees. Despite battling Iska, the creature was cautious with Drako, feeling that it was a threat to him, but since he had not interfered, he tried to keep the battle away from the more massive dragon. 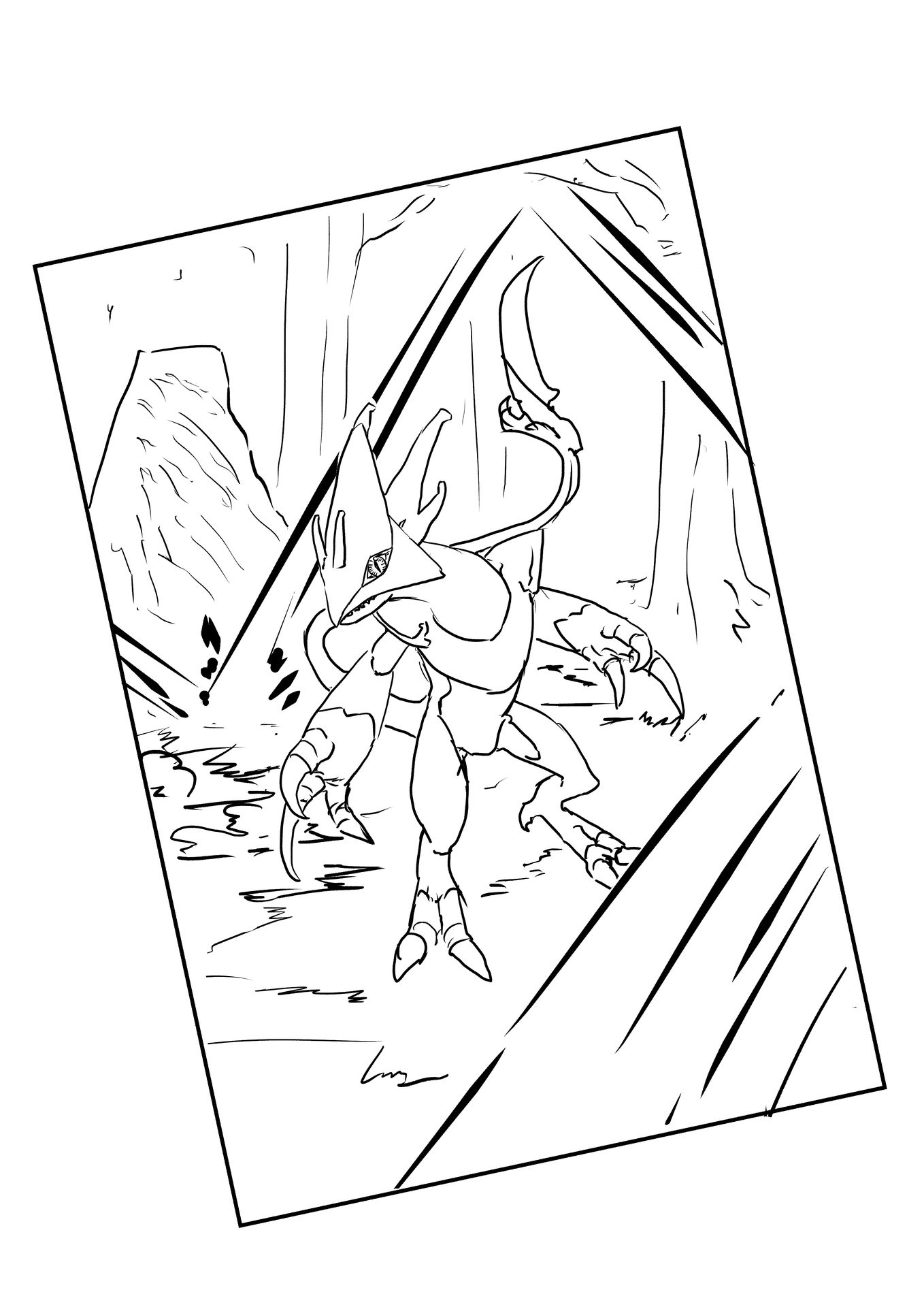 But she couldn’t attract him; Iska had realized what she was trying to do and stayed in the area. They shouldn’t get too far away from Tom.

And as she waited for the chance to strike a critical blow, she felt something strange. There was another look at him besides Drako. The creature so noticed and seemed nervous that he ran away after standing still for a few seconds.

He turned around to ask Drako what was going on and what he saw was his partner standing up, looking around.

– He’s close by. Stay close to me,” he answered as he looked for where that feeling came from.

– All right, I accept Iska while I keep my guard up.

They were like this for about ten more seconds until the feeling of being observed disappeared. Drako knew he was stronger than the low-level creatures they had been facing. He was curious and almost went out looking for him, but he remembered that he was now taking care of the little one.

– Let’s go back to the others; we have to report this,” he said.

Then he pointed to Iska to get on his back.

When they arrived at the camp, everything seemed relatively calm. He approached Sarah and told her what had happened. She was the team captain, so he knew she would decide what to do with this information.

– Lessar, did you catch anything,” asked Sarah as she looked up at where her creature was flying. And she responded by shaking her head.

– We are close to the portal; these are safe areas at a certain distance. I think nothing will happen while we are close,” Adolf said as he pointed to the portal which was about 30 meters away.

– You’re right. We’ll wait for Bronk and the others to arrive and see if they were followed too.

Tom approached with some fish and asked what was going on.

– So what do you want to do? I ask Sarah as she sets things up.

– We will stay here today. As Adolf said, this is a safe area, so there should be no problem. When he heard this, Tom prepared the food.

Aiden received the news with his eyes shining as he heard this and celebrated with his arms raised. He was looking forward to a fight after such a quiet week.