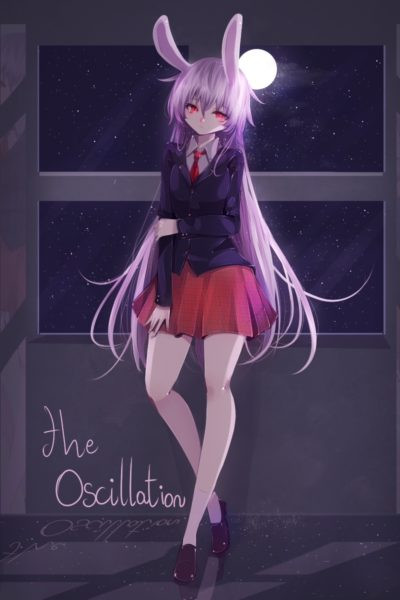 Today, we welcome Voxxen! He’s releasing a new novel today, called The Oscillation. It’s a female-led drama about a world that gets hit by a semi-hidden gaming system, so if you like character-driven serials with RPG elements, multiple-leads (while following mainly one), and mythology, you can check out the prelude here!

Grandia sat down with him for a rather philosophical interview about his newest release!

Welcome, Voxxen! So, how did you find Creative Novels?

I’ve been with Creative Novels for a while; I first released A Tail’s Misfortune on the site. I heard about it from a friend and started the application process.

Ah, a veteran returning to expand our pool of offerings, I see. Now to the fun bits! Tell us about The Oscillation. What is it about?

Rachel is a 3rd-generation immigrant from Korea; she comes from a semi-traditional household that values success and has been in competition with her brother all her life. After some drama with her sister-in-law, she’s forced to live on campus at Miami University. On the day The Oscillation occurs, she turns into a Lunar Hare Mythickin. The world freaks out, martial law is instituted, the CDC is out in force, and everyone’s trying to figure out what’s going on.

Interesting. So you’re having it take place in the US. It kind of sounds like you’re trying to make it as realistic as possible. If so, did you have to do a lot of research for this?

Yes, but that’s why I have it take place in Miami Beach; I’ve already done extensive research for Miami Beach for A Tail’s Misfortune. I also particularly enjoy stories that make the scenes as realistic as possible.

It also sounds like you have multiple lead characters? Can you tell me a little bit about that?

In most of my serials I have a primary character and then a few main characters, potentially even showing villain’s POV’s in specific instances (that’s more in A Tail’s Misfortune though).  The world doesn’t revolve around any of my characters. Instead, my character is in an active society that is in motion even when my character is not at the scene.

Therefore, my primary character (Rachel) may not be the one to face the main villain of an arc; Fiona, Maria, or Scarlet may face the big bad of the arc or may have their own spotlight. Each character has something to contribute, but I keep it to a primary set of POV’s.

Do you find it difficult to differentiate between so many main characters? I imagine it would be easy to slip up on the characterization if you’re not careful. Or do you have an easy way of changing your mindset when writing different MCs?

I don’t really have to think about it. When I’m writing a character, I’m having them react to a scene. I instantly get into the roots of that character because my mind flashes back to their backstory. How would this character react with the backstory they have? It has to do with the events I set up around them; I frequently don’t have a full understanding of where the direction will go.

A Tail’s Misfortune, for instance; in the latest chapter, I had no clue it would take that direction until I sat down and was in the process of writing it… the chapter turned out to have significant implications that changed much of the story that I hadn’t planned initially but is what realistically would have happened for these characters. I didn’t realize it until I followed the direction of the scene I had planned previously.

What’s your favorite thing about this novel?

I love the characters, to be honest. I love what I have planned, but none of that would mean anything unless you have good characters. I am a massively character-driven writer.

That’s awesome. I look forward to many strong characters from The Oscillation. If you’re more character oriented, do you find it difficult to come up with plots while you always have characters ready? Or do you build characters to fit a plot? Or something in between?

You might have been able to extrapolate it from my answers above, but I tend to write a setting and then place my characters in that setting and watch them play it out.  Consider it like an RPG where there’s a plot running in the background and other characters just so happen to come into contact with the cast as they’re going through the system. Carter, I didn’t plan for him to become the villain he turned out to be and the history he ended up developing with some of the cast, but that’s how the scene played out.

The setting and several things I have planned, but when I’m writing to get there, many things develop that I haven’t anticipated. This generates many subtle plots and foreshadowing, layering so many details that I can surprise myself when I think back on how many things weren’t intended, but ended up being written in.

Actually, in A Tail’s Misfortune, one of my characters says something in one of the Psychology/Philosophy chapters that reflect my writing style quite well:

“Yes, ____’s feats impress me, but I look far deeper than a few weeks or years. I see the threats of fate, time itself. That does not mean things are predetermined; again, it is more complicated than that.”

Some of that philosophy/psychology/sociology is reflected in The Oscillation but not spelled out like in A Tail’s Misfortune, which dives into human nature and the mind.

…Seems kind of complicated. Do you have a favorite character? Or one that you identify with?

I love Rachel, I mean, she is the main lead that has the most spotlight, but Scarlet’s story … man, I love what I’ve developed with Scarlet. Scarlet wouldn’t be good without the other characters to support her, and the same thing can be said with all the other characters.  The four main girls certainly do complement each other’s weaknesses. If I had to pick, it would be Scarlet though.

It seems you put a lot of thought and effort into this novel. Is there something in particular you’re especially proud of?

Proud of … I enjoy looking back and seeing what choices my characters have made that brought them to a particular point; even the villains and their decisions. There are three directions any character can take when presented with an event, The Sword (Warrior), The Word (Diplomat), and The Bow (Slave); this is true with every person in life and can be broken into many subcategories, but these are at the base.

My characters may choose to back down at specific points, forgive, fight, talk, compromise … exploring Jungian psychology is another interesting point in regards to the Shadow and Persona, the Yin and the Yang.  I just wish to be a good guide … how did I phrase it at one point? I think it was on the base wiki I made for the serials…

“I’m happy to be a tour guide in the worlds I’ve discovered inside my mind and hope to be a good cicerone.”

I’m proud to be a guide to the inner workings of this world.  Some are freaking out a bit over the semi-hidden System that’s been shown in the recent chapters, and I’m happy to give what insight others might have missed if they rushed through the serial. I give quite a bit of information in the first FAQ actually.

What inspired the idea for your novel?

TBH … I wanted to make a bunny-girl character >.> she ended up a hare after my research, a completely different species.

Lmao, I think that’s kind of a common thing among authors. You’re an author, so I’d love to see how you’d finish this sentence: When I looked up, the night sky was full of stars but no moon, and I knew…

Okay, what would I do with this sentence … I’m rather picky with my wording, and it really depends on the context and what I’m going for.  Let’s see what I can come up with (one of the editors tried to have me help edit an LN chapter … I had to stop because I would have rewritten the entire thing).  T_T *Cracks fingers* I’m a 3rd Person Limited author too.

Rachel looked up as she walked under the open sky, the heavens were full of stars, but there was no moon to fill her Lunar Pool, and she knew her luck had run out; it was a new moon.

Interesting response! Thanks so much for talking with me! Now for the big question. What will the update schedule for this novel be like, especially since you’ll be balancing two novels now?

Oh, I’ve been writing this serial in conjunction with A Tail’s Misfortune for months now.  I release ATM every Friday Night MST, and I release TO every Sunday Night to Monday Morning MST.  One chapter a week on each serial … I have had to put The Helena Chronicles on ice after a few weeks of trying to keep up with three serials a week with each having a minimum of 3k words and up to 8k words per chapter.

I hated putting my first girl on ice, but TO and ATM were more popular than THC, but those fans were still crying over it.  Perhaps I’ll continue Volume 2 Chapter 6 when I get a bit of time … but I’m also working on a side project slowly for The Oscillation with another character that has her own series … I’m hopeless.  T_T

I thank all my patrons that help mitigate a bit of the price of commissioned artwork I’ve had done for the serial.

Yay! Thanks so much for joining me! Anyways, I hope you learned a little bit about our new author after this, readers. Please do check out The Oscillation here!