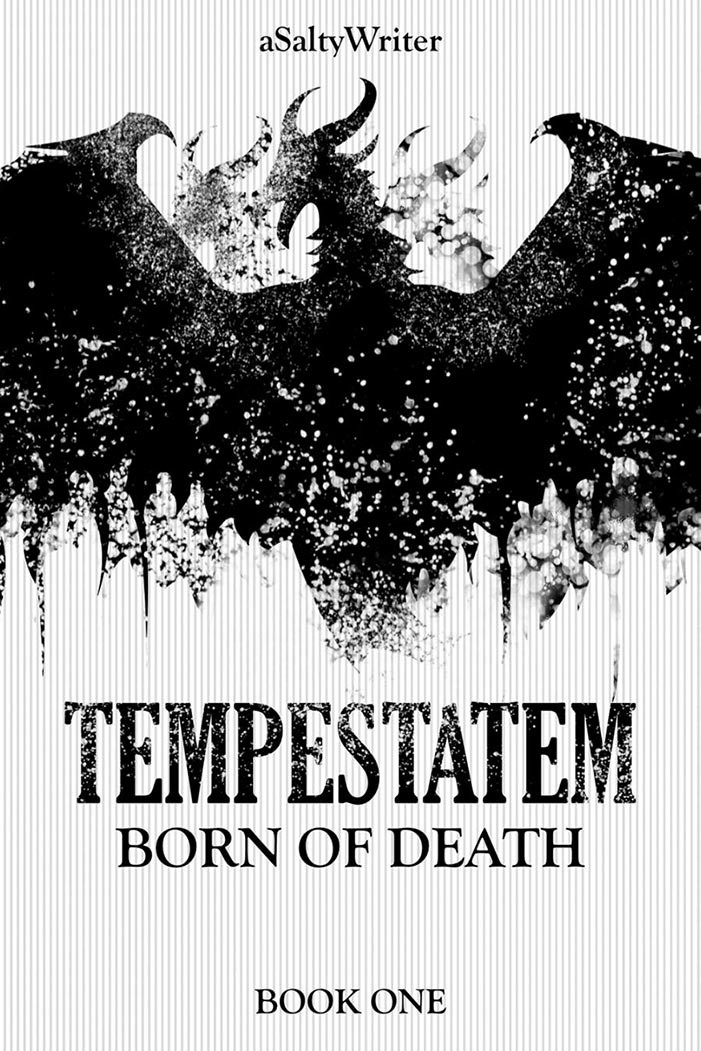 Q: Hello everyone for another interview. Today I am joined by a very special guest, latest author and close friend of mine, SilverCrow. Welcome to the show.

A: Thank you. It feels very special to be here. I’m happy that speaking with you since you got me to join the Creative Novels family.

Q: From my research, I believe you have an abundance of pets too. Am I right?

A: Yes. Four, to be exact. They were all rescues. It’s a very special process, developing a bond and getting to know them. Three of them were part of families that had kept them for a while, later choosing to abandon them. Cross, our eldest dog, was abandoned when he was 8 – that’s senior citizen time, and we found out he had a tumor shortly after. He’s all better now though. It’s beautiful getting to know them, and I try and picture a lot of their qualities into my writing as well. Tallulah – our deaf super dog – is the co-author of the Tempestatem even. It’s a cute story, I think. Since I work long hours, I only ever get the time to write late at night. I wrote the bulk of my story during harsh Delhi winters, and Tallulah was always on my lap to keep me warm and encourage me with barks when I banged my head against the table in frustration.

Starting from the left, that’s Mishka – our first, and Clara. Tallulah takes center stage, that was her on her fourth birthday. And then it’s Cross – our oldest, and Clara again. We found Clara when she was about a month old. She had lost her mother and the rest of her litter. A lot of problems at first, but a beautiful part of the family now. Sorry, I realize I went on for a while there! 😀

Q: How adorable! I’m sure the audience would give you bonus points as we transition into the meat of the interview: Tempastatem, your novel. Give a brief rundown of what it’s about.

A: It follows the story of Mioverold, a fantastical world that mirrors our own – Earth. The story itself starts when the protagonist transitions from one world to the other, and slowly realizes that much of the old legends and mythologies – Greek, Indian, Roman gods, and such, bleeding as a part of reality within Mioverold. But the world has its own share of mythologies, gods, and traditions. Everything exists in harmony.

Q: A story akin to the old epics, huh?

A: You could say that. It was important to make it very all-inclusive. I wanted to use a lot of stories from legend, some from Indian, some from Roman, Chinese, Japanese, everything. But in parallel, everything had to make sense. And how does it all tie into the story? Mioverold is a very God-driven world, and the laws needed to reflect that regardless of where the legend was from. I’ll leave out what the story is about – it’s an experience I think and hope people would be excited to walk through and uncover.

Q: These sorts of novels require a different approach when writing. How difficult has it been?

A: It’s in the research, primarily. I’ve also tried to adopt an older style of writing – not with the choice of words, but the way I write, to make it feel more authentic. It’s also a story with several important and interesting characters, and for large parts of the book, the story dives into different plots and characters that leave the protagonist uninvolved. There’s a lot of world politics that Gale – the protagonist, simply isn’t used to. He learns through the journey, of course. Military tactics and more, while keeping in mind the laws and rules I’ve set for Mioverold.

It’s certainly helped, the support I’ve had from family and friends – especially my girlfriend. I’ve bounced ideas off her, and the end result has always been good. I have a couple of close IRL friends, who pulled me through moments when it felt too hard, where giving up made more sense than pressing on with paragraphs. I’d like to point to you and Pandora as well; I’ve met you both through a different Discord Channel, and I must admit the amount of support from you guys really helped as well.

Q: It’s great to have such supportive friends and family!

A: That’s true. The landscape when I first started writing, or rather, developed a passion for writing, wasn’t very encouraging. There are defined routes to success here. Arts – music, acting, drama, writing, and the kind, weren’t often looked at as routes for success.

You could become a doctor, yes. An engineer? Admirable. A lawyer? Classy. But a writer? That’s more pencilled in as a hobby. But I had great, immensely supportive parents. They raised me to be stubborn, to the point where it was encouraged I challenge even their worldviews. And I stubbornly pressed on in my pursuit for creating a world that would one day become as infectious as a virus. I wanted to create a world that stretched as far as it could, and I don’t think it would’ve been made possible if not for the people in my corner.

I remember late one night when my girlfriend suggested that I quit my job and that she would be more than happy for us to cut back on expenses as I ready the book. She works as well, and I know she’s been planning something big for her own break, but she was happy to postpone that just to improve my chances and odds at success.

Q: Well, that’s brilliant. And after all that, I’m sure you’ve got plenty of advice for potential new authors, right?

A: Well, I’m not sure. I’d treat myself as a new author as well. But to anyone starting out fresh, I would really just recommend that they tune out what’s negative. I’ve written close to ten or so finished books, and it took several years for me to finally connect with Mioverold and Tempestatem. In that journey, I’ve refined my skills with English, the way I write and approach stories – maybe just evolved overall, to a respectable level of maturity. But until you find something like that, something so strong that you’re willing to sacrifice everything in pursuit of its success, just keep at it. Never rush with stories.

A lot of new authors and even I’m in the habit of making this mistake from time to time, rush their stories. Define your rules and stick with them. For example, don’t start a war for a couple of high points. Don’t make your character a fix it all, define and understand his or her limitations. Have meaning and purpose to everything in the story. Always be open to advice, there’s always something you can improve. But also be mature enough to tune out the noise. Ten people giving you advice, learn to filter what works from what doesn’t. Often, you only need to pay attention to two and ignore the eight. Learn to make that distinction.

Q: Have you picked up an odd habit or two while writing?

A: I’m a haphazard writer at best. When I hear people talk about powering through thousands of words in one go, well, it makes me worry. I’m someone who takes hours to write maybe a hundred words. On good days, I push it to a thousand. I often find myself writing and deleting the same paragraph over and over again. Is being haphazard a habit? No, I think it’s something very evolutionary. I used to be able to write 4,000-5,000 words in under an hour. I can’t imagine doing that anymore.

Now interestingly, there are moments when a particular soundtrack inspires an inner, more efficient version of me. I write much better with that kind of music in my mind. I obsess over finding it sometimes, doesn’t always happen, and in that obsession, I end up wasting a couple of hours with no words to show for. The day ends up being fairly unproductive. It sucks. But that’s more a bad habit than anything.

I also obsess over how different characters might solve the same problem, I read a lot of books – I sometimes reference mythological stories on how situations were handled. I try and approach things with obsession, and it’s made me slow. These are new things that I need to incorporate better into my overall process of being a writer.

Q: Haha. I always love that question. Brings such variety in answers and so does the next: What’s the origin of your pen name?

A: I have two actually. aSaltyWriter and SilverCrow. SilverCrow was something I came up with as a joke.

I’m fairly dark-skinned, and I was often an underdog growing up. I played a lot of sports – tennis, mostly, and before a spell of dominance, I was more the cannon-fodder than somebody’s rival. I related more to being a crow in a world of hawks, and I developed different aspects of my game – basically, built a really strong foundation and attacked the hawks where it hurt most. I was once told that a murder of crows, despite weakness, could take down bigger, fiercer prey. When I started becoming more a favorite than an underdog, I treated it as an evolution. Hence, SilverCrow. Years later, one of my friends joked about how my storied name had become part of popular anime. Coincidence? It’s a great coincidence, I suppose.

aSaltyWriter relates more to what I had become through my first job after college. I spent two years with a company that had taught me a lot; it was all the right things – growth-wise and all. But in my growth as someone who helped define and helm content marketing for them, it became almost impossible for me to write with joy. It left me exhausted mentally, and with little room for the stories, I had imagined and fallen in love with. I almost started to hate the idea of writing. It made me salty. I’m sure you can connect the dots now. When I quit, that’s when I started writing the Tempestatem again. I swallowed all the salt and promised to never let my job get in the way of it again. aSaltyWriter is a reminder of that phase of my life.

Q: Final thing before we end the interview. Tell us a joke.

A: Damn it, I’m more a sarcastic person than anything. Dark humor? Well, let’s see. My grandpa’s last words are something I’ll always remember. If I recall correctly, he said something along the lines of, “Stop shaking that ladder so much, you c***!”

Too much? Yes. That’s me. But jokes aside, I love you, grandpa. I hope you’re watching over all the debauchery I commit en route to becoming a successful author. Too much again? Well, there’s nothing I can hide from the dead anymore.

Q: Well, we’ll censor the word later, so no problem. But that’s about it! Thanks for joining me and I hope your novel is a great success!

A: Thank you. I can’t wait for people to start reading my work! 🙂