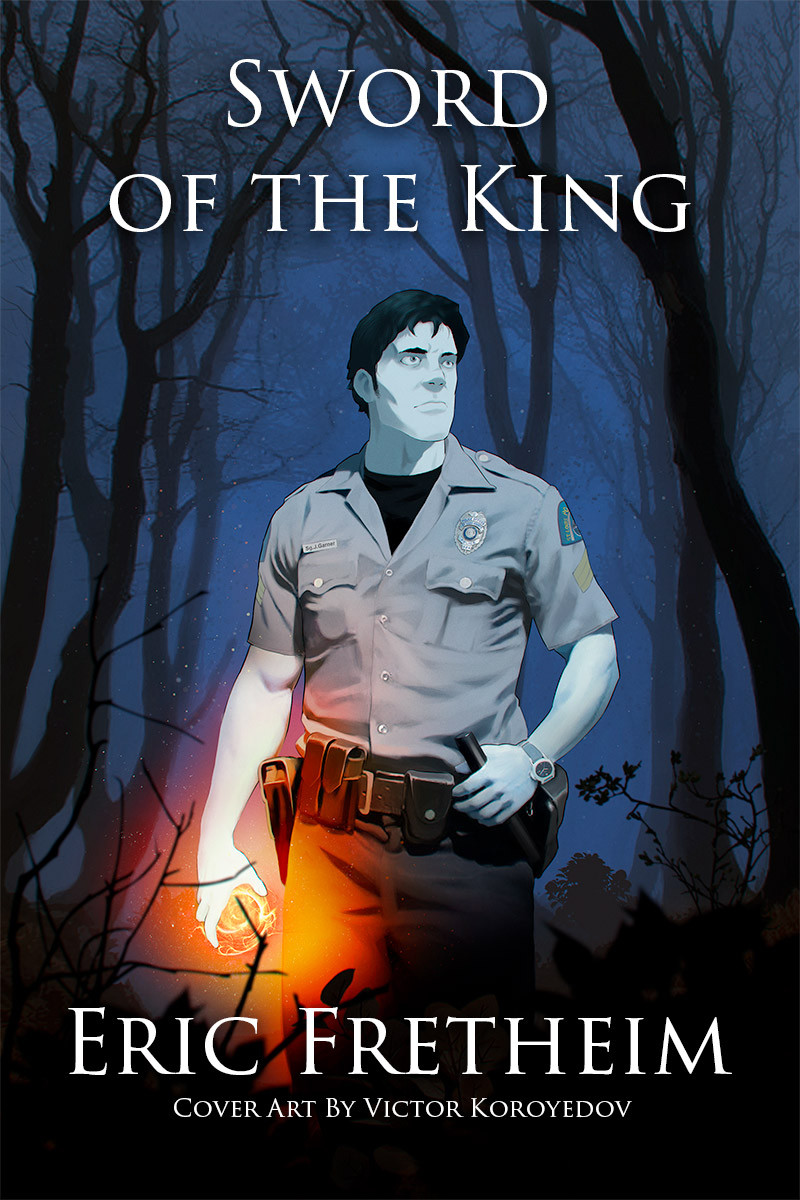 J: Welcome back for another interview! I assume you have something brewing for our readers?

Fushigi: I currently have two works on Creative. “Substitute Hero”, is ongoing and not even vaguely close to being finished, but I have wrapped up “Tales of the ESDF”, and it’s time to launch something new.

Sgt. Jack Garner, a police officer from near-future St. Louis (around the year 2040) falls (or more accurately, runs) through a portal into a different world. However, the people there are quite familiar with Earth. In fact, the two people he joins forces with have been to Earth and are chasing after the same criminal.

I won’t spoil any more of the story, but on page one you will already see that the otherworlders have magic-like powers. Jack is in for a ride, and that ride is going to take him through several worlds, dealing with many kinds of people, human and otherwise.

J: Very interesting. So, why “Sword of the King”? Is the title a hint to what comes later?

Fushigi: It would require significant spoilers to explain the title “Sword of the King”, so I won’t. But I will say that it is the name of the series, not the first book. I decided that it would make more sense to post it under the series name online, because I am going to post all the books in a single continuous series. The actual title of the first book is “The Guardsman”, which refers to Jack. On the world that Jack’s two companions come from, law enforcement officers are called “Guardsmen”,so that’s how they refer to him.

By the way, a very thin chance exists that the reader will have seen an earlier version of this story under the name “Seryahdin”. I posted that version many years ago (~2007 or 2008) on another site, but removed it because I wasn’t satisfied and decided to completely rewrite it. I have no idea if anyone who read that version will be reading this one, but I ought to mention it anyway. The story has been dramatically rewritten, so even if one did read it, it isn’t the same anymore.

J: Alright then. I think we’ve heard enough! Tell us the detes. How much are your fans and new readers getting?

Fushigi: I’ll post twenty chapters up front and then follow a Monday Wednesday Friday Sunday schedule, posting one chapter at a time. I’m writing this story in shorter chapters than “Substitute Hero” or “Tales of the ESDF”, so I may eventually increase the postings to two or even three chapters at a time, or mix it up. I’ll stick with the schedule, though.

Fushigi: I hope everyone enjoys. I look forward to the comments!