Elenis smiled gently as she folded her arms.

” So, you finally answered your father’s wishes after all these years huh, Abner. He would’ve been ecstatic if he were here. Mummy’s not trying to discourage you but it will be a tough challenge to catch up with the students there, especially those in the Elite’s course. Nevertheless, mummy is always going to support you if it is your wish to enroll in Cress.”

” Yes, I am aware of the tough competition I will face if I tried for the Elite’s course. That’s why I’m planning on applying for the regular course instead. It might be more manageable for me then.”

The regular course that Cress offers has a less rigorous curriculum and focuses more on general education such as the history, trade and infrastructure of Kaigran. Since the establishment of Cress Academy, members of the Council have mostly hailed from its Elite’s course. However, there are some exceptions where students from the regular course join the Council as well. The Academy considers all of their students as bright prospects and does not discriminate against students from either course.

“Oh Abby, since I have already done a year at Cress, I could help you with subjects that I’m familiar with. Your little sis will support you with the best she can too!” Said Eiya as she tried to distract herself from the sadness by cheering for her brother.

“Well, mummy thinks that we should stop here for today so that u two can get some rest. I’ll still be at home for two more weeks to finalize some papers regarding your late uncle. Head up to your rooms first, mummy needs to prepare a change of your bandages.”

“Well, I can help out for a while but I’ll need to head back to the trinity to continue my guard duties, Elenis” said Wynchell as he started to get up from his seat.

Abner and Eiya spent the rest of the day recuperating at home while being nursed by their mother.

While resting in his bed, Abner started to notice a warm sensation on his skin. Opening his eyes slowly, he found out that it was already late in the afternoon. The slanted rays from the evening sun shone through his bedroom windows, casting the shadows of nearby trees onto his bedroom floor. Abner struggled to get out of bed as he slowly placed his feet onto the cool bedroom floor. He sat at the edge of his bed for a moment while waiting for his dreams to fade away. Then, he stood up and started to make his way to the living room.

“Oh Abner, you’re finally awake. It’s still a few hours till dinner. Why don’t you take a stroll in the backyard in the meantime if you don’t feel like returning to rest? Eiya is still asleep too.” Said Elenis while she was preoccupied with dinner preparations.

He stepped into a small garden that his family grew in the backyard. The setting sun had given the flowers there a tint of golden yellow as they sparkled and swayed in the evening breeze. With the trees rustled in the background, Abner closed his eyes and took a deep breath and started to reminisce memories he had with his dad and uncle…

Suddenly, just as he was deep in his thought, Abner heard a loud trembling in one of the bushes in the distance. He tilted his head towards the sound and seemed to catch a faint shadow of a person in the bushes at the corner of his eye. Alarmed by what he had presumably seen, Abner did not think twice before darting into the bushes, chasing after the shadow.

“Is it the enemy again?” 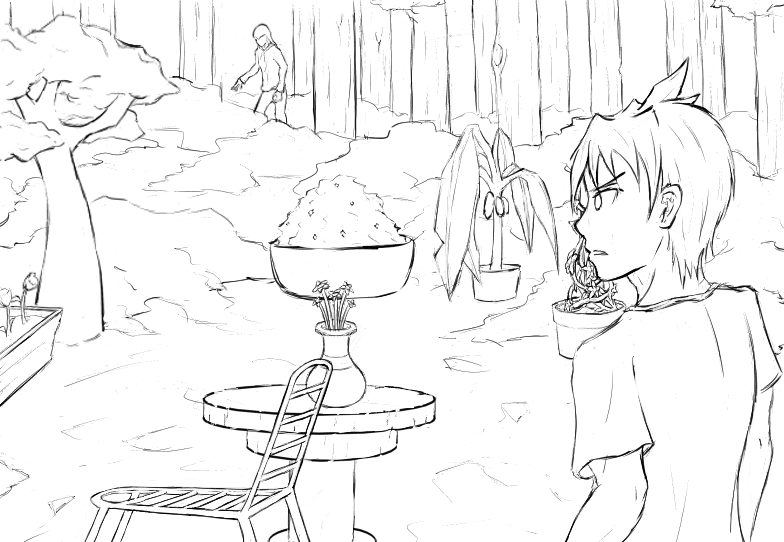 The two of them started to enter an area with thick vegetation. With the trees blocking out most of the sun’s rays, the forest floor was rather dark, especially now when the sun was setting. The mysterious figure dived into bushes and made sharp turns around the tree trunks as it tried desperately to shake off its pursuer. However, Abner was relentless with the chase and never lost sight of the person.

Before long, he noticed that they were entering into a small clearing in the forest. The person was seen to have immediately escaped into a peculiar door that stood prominently right in the middle of the clearing. The door was left partially open by the person. At this moment, Abner’s mind was filled with thoughts and emotions. He was worried that the strange person was someone sent by Landon but was also fearful of the potential threats that were hidden behind the door. 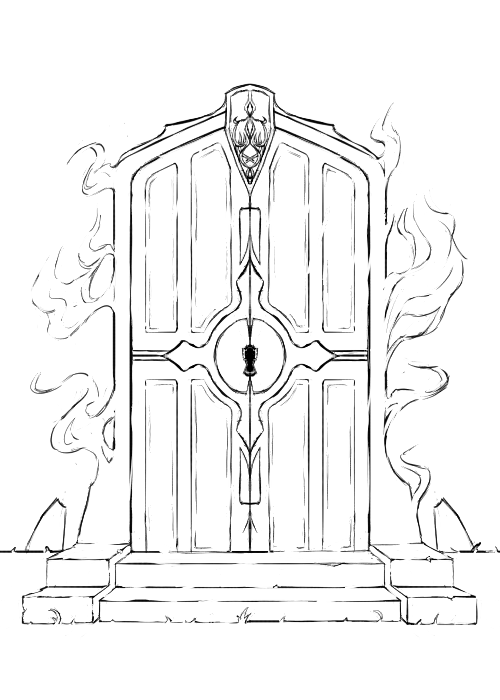 After panicking a few minutes over the dilemma between returning back home to get more help and continuing his pursuit, Abner finally took up courage as he walked bravely towards the mystical door.

“No, I can’t always be relying on others. I must be strong and independent.” thought Abner as he placed his hand firmly on the chilly surface. Despite still being anxious, He pushed the door slowly as it creaked open eerily.

Upon entering the other side, Abner immediately turned his attention to a few glimmering lights from a distance. As his eyes got accustomed to the light, he noticed that the sparkles were caused by light shining on a huge wall made out of tainted glass. It was already nightfall when Abner had entered this place. It appeared that he was in a large place with exteriors made of glass, almost like an oversized greenhouse.

Looking through the large tainted glass, Abner saw a picturesque scenery that seemed to only exist in fairy tales. In the sky were numerous levitating floating islands enveloped in plants that Abner had never seen before in his life. Streams of water seemed to flow from the upper Isles to the lower ones. Abner had assumed that he was on one of the floating islands too since there was a river that flowed gently from the outside all the way throughout the middle of the building he was standing in. The reflections of the moonlight on the water casted dreamlike reflections on the ceilings of the dimly lit room, illuminating the place with a luminous blue light. 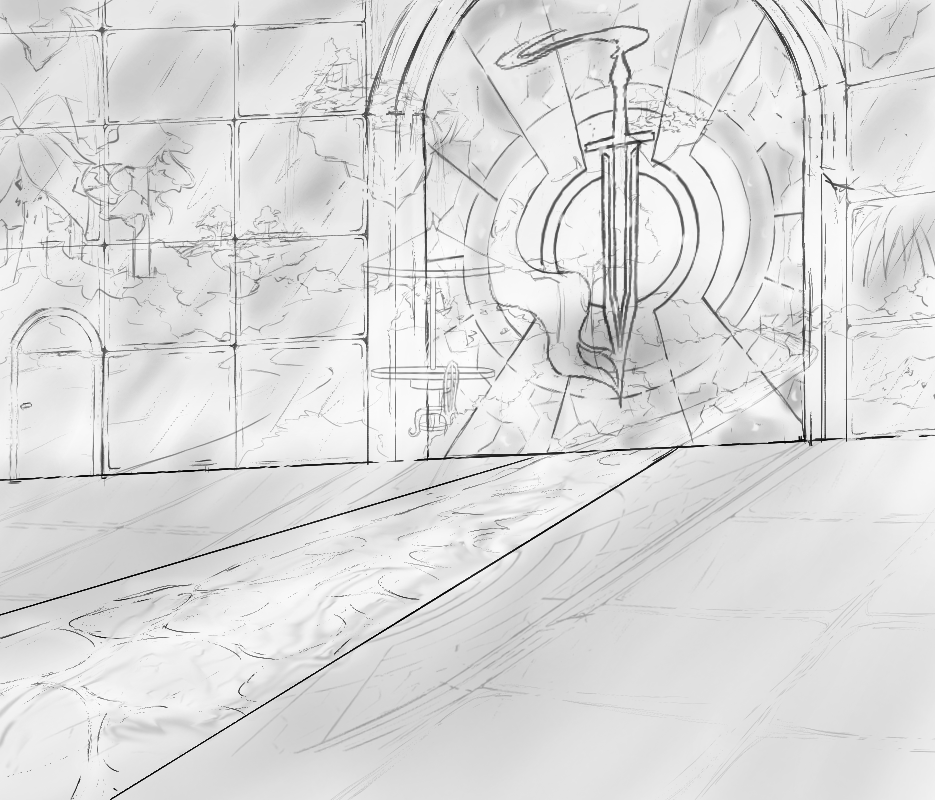 “Where am I? I have never seen a place like this in Kaigran.” Abner was immediately mesmerised by the beauty of his surroundings.

“Intrigued? I’ll take that as a compliment.” The voice came from a bridge that was built across the body of water. Abner could see two figures on top of the bridge. Upon closer inspection, one of the figures belonged to a tall fine-looking man and the other, a young girl who seemed to be panting heavily.

“Strange….are you also the Promised that came to this space as well? You sure gave Clarissa a run for her life, young lad. Haha” chuckled the man. Strangely, Abner had a feeling that he had seen the man from somewhere before. His name was at the tip of his tongue but he was unable to utter it.

“Have we met before? For some reason, you seem to be an awfully familiar figure to me” asked Abner with forrowed eyebrows.

“You sure have a sharp eye lad. My name is Issuhcus Chivesker. I’m currently the Dimension Guardian and the creator of this place which I call, the Room of Infinity.”

“W-Wait, you’re Lord Issuhcus?! The first Dragon Contractor of Kaigran?” Abner was lost for words. He had finally recognised Issuhcus from old sketches of him in history textbooks and records of Kaigran.

“Haha yep, that’s me. How has Kaigran been doing recently, my dear descendant?”