No words could describe how relieved Elenis felt after finding out that her children were alive. However, her heart ached at the sight of their bruised and injured bodies. She didn’t want to fathom what had happened to them in the dragon realm. All that mattered now is that they had returned to her alive.

Only allowed on Creativenovels.com
Dear Readers. Scrapers have recently been devasting our views. At this rate, the site (creativenovels .com) might...let's just hope it doesn't come to that. If you are reading on a scraper site. Please don't.

After the reunion at the front porch, Abner, Eiya, Elenis and Wynchell gathered in the hall of the house.

” I assume that Wynchell had already given you two a brief update about the situation in Kaigran. Do tell mummy to stop if you need to lie down to rest.” Said Elenis, still concerned about their injuries.

” For now, your father is currently held captive by the enemy. Kaigran recon forces have discovered that the group fled to the nation of Xebaia. We can now assume that the group responsible for attacking Kaigran that night are part of the Xebaian forces.”

Xebaia is a nation located northwest of Kaigran. Abner recalled hearing of an internal war that broke out in Xebaia a few years ago. It was said that a rebel army overthrew the ruling nobles during the war and took control of the nation. Travelling tourists and merchants have stated that Xebaia is currently ruled by the leader of that rebel army and he is said to be a merciless tyrant.

“Well, we are really unfamiliar with the new government of Xebaia. All we know is that the situation there is rather tense and that the current ruler is ruthless. So it is possible that they carried out the attack but their motive of capturing Largin still remains a mystery.” Wynchell then took a sip from his drink as he finished talking as Elenis continued after him.

“I had to rush back here immediately after hearing the news. Uncle Jeph was given a proper funeral and burial so you two can rest easy. But I was too distressed to do anything else the past few weeks. The enemy had taken your father and killed your uncle. I-I thought I would lose you too when i heard that the both of you were missing.” Their mother paused for a while as she held back her tears.

“Well, with the loss of Jeph and Largin, the Council has appointed Lord Zephyr Cress as the acting Head contractor. Ever since that night, Council members seem to be working ever harder now to safeguard Kaigran better and also, planning on retrieving Largin from Xebaia. We should learn from their examples and do what we can now and in the future instead of lamenting about the past.” Wynchell tried to encourage the three of them but he knew that words are easier said than done. They would be in low spirits for a while.

“You are right Wynchell, we need to move on.”

Wynchell was a little surprised with Abner’s mature reply. He had always treated him as a naive little brother since young.

“We escaped to the dragon realm with dad’s help. During the past weeks there, we seeked refuge with two dragons which we eventually formed a contract with. We’re dragon contractors now.”

“Dragon contractors? Even you Abner?” Elenis couldn’t believe her ears. She was unable to comprehend how Abner was able to form a contract with a dragon without any prior knowledge or training.

“Yes mom, it was a forced contract”

“Forced?!” Exclaimed his mother as her eyes widened. She was starting to understand why Abner’s  wounds were so severe by now. 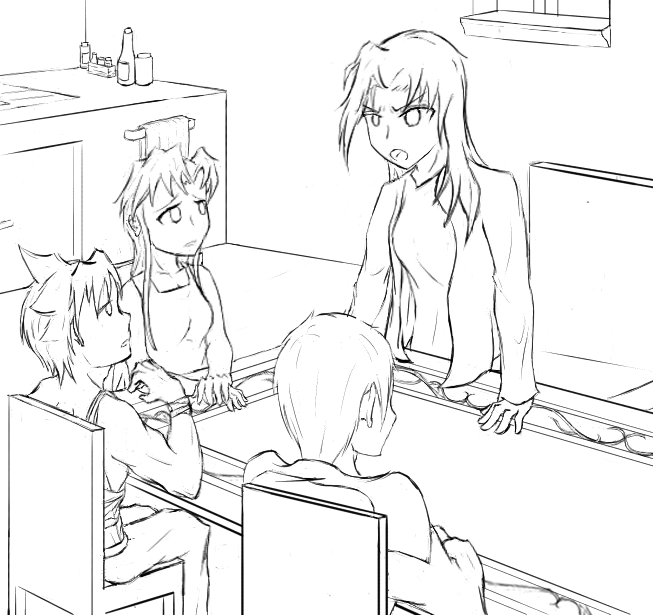 “We didn’t have a choice. One of the Xebaian forces, Landon, continued pursuing us even in the dragon realm.”

“Landon Trivol….yes, I do believe that is the name of Xebaia’s current ruler. Why was he after you too?” asked Wynchell rhetorically.

“Forced contracts usually end in failure! You could have di-“

“There is no need to worry ma’am. The forced contract was a success with Abner.”

Abner’s eyes were bright crimson when he interrupted Elenis. Eiya immediately recognised the change in her brother and knew it was Blahaze speaking with Abner’s body.

“A pleasure to meet you. I am Abner’s contracted dragon, Blahaze. The enemy we encountered  in the dragon realm was skilled and formidable. We might’ve even suffered casualties had Abner not made the decision to become a dragon contractor. I can vouch for his valour and strong resolve to save all of us.”

Elenis started to recall what Largin had once said to her about their son after hearing Blahaze’s words.

“Yes, Eiya is definitely a responsible and hardworking child…but watching them grow up, I still believe that Abner is a hidden gem with potential. He’s just unwilling to take up responsibilities and underestimates himself often” were his words when they were once talking about their children.

After taking a while to calm down, Elenis started to speak again with a gentle smile.

“Well mom is glad that you’ve grown, Abner. But please, try to avoid being too reckless in the future. So, now that you’ve become a dragon contractor, do you have any plans for the future?”

Abner regained control over his body as his eyes returned to their usual color.

“Thanks for listening to what Blahaze had to say, mom. I have been thinking about it for the past few days. But for starters, I would like to sign up for Cress Academy”