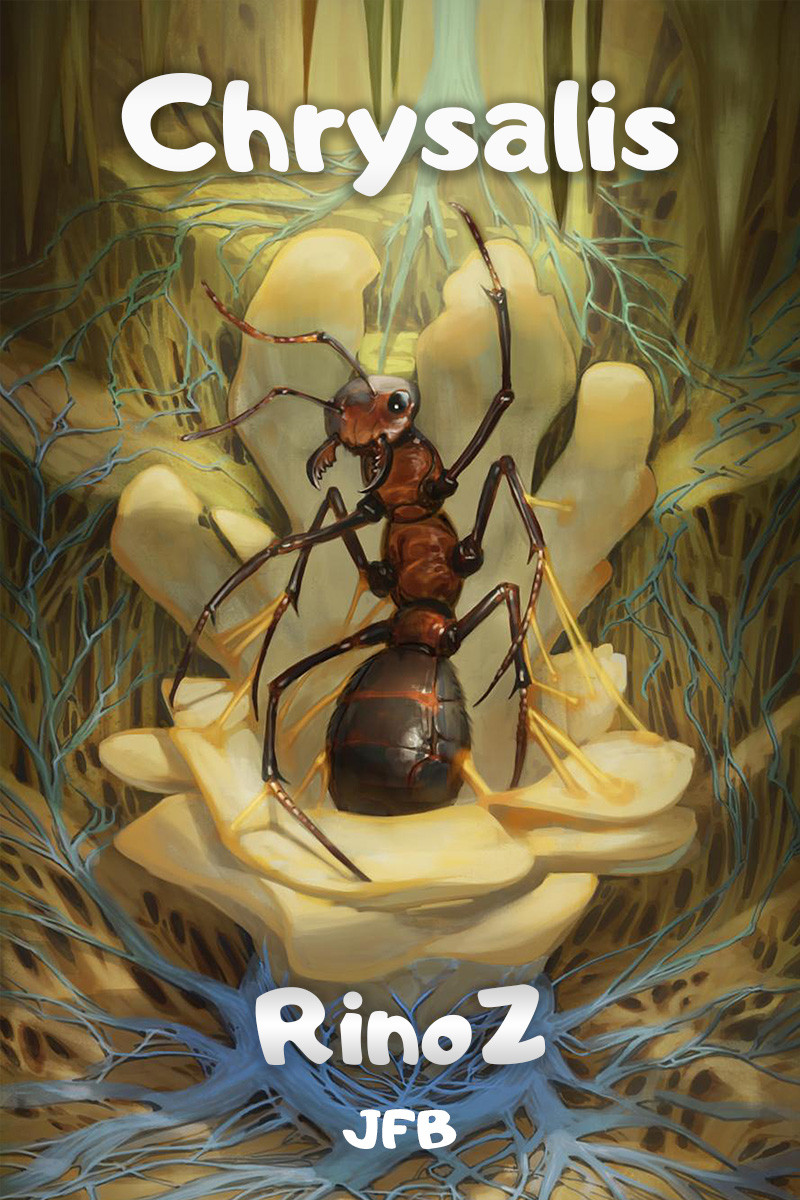 Readers, grab a cup of your favorite beverage and settle in for several hours of reading!

Today, we welcome RinoZ! They’re releasing a new novel today, called Chrysalis. It’s an LitRPG featuring a monster protagonist, so if you like adventure with humour, combat, and suicidal ants, you can check out the first 300 chapters here!

Grandia sat down with them for an interview about their newest release!

Welcome RinoZ! So, how did you find Creative Novels?

Well, we’re so excited to have you! Now to the fun bits! Tell us about Chrysalis. What will we see in this novel?

This is my first novel and is a little … odd. I was inspired by novels like “Kumo Desu ga, Nani Ka!” to try and write a monster reincarnation novel but I wanted to do it a little differently. In most novels like this, such as “That time I got reincarnated as a Slime!” it doesn’t take long for the main character to evolve into some variety of attractive human, I didn’t want that. In this novel, as the characters evolve they only get more monstrous in appearance and further away from humanity. So we will see our protagonist adjust to his new life as a monster, seek out his new family, and try to unravel the mysteries of his new world!

Wait, did I read this right? Your MC is an ant?

What have you got against ants?! First off, he’s a monstrous ant, so he starts off around medium dog size, secondly, why not? Reborn as monster stories have had people reborn as spiders, slimes and all sorts of stuff. I thought ant would be an interesting way to go, since he starts so weak and separated from the rest of his colony, it gives the novel a very low point for the character to begin his rise!

Huh. I never thought about it that way! And it’s definitely a new premise. Talking about writing, you’re releasing 300 chapters today! That’s an insane amount of writing! As a veteran author, do you have any advice for people who might just be starting their writing careers?

Remember that most people won’t even pick up a web novel if there aren’t many chapters to read, so don’t be shocked if nobody wants to read your story if only ten chapters have been released. Be patient, believe in your story, and if it’s good, readers will come.

Ah, what practical advice! Take heed, future writers! RinoZ, do you have any fun stories about the development of this novel or any anecdotes you’d like to share?

Thinking of the previous question, I can remember when I was posting for like, ten readers, just after I’d started posting. I read every comment and review and checked every day to see if my number of readers had increased. That was less than a year ago now and it seems crazy to have come so far. I still try to read all of the comments but I don’t always have time.

I’ll always remember one comment asking for more scenes of the queen ant laying eggs. I mean, everyone has to be into something, right?

…Okay… Anyways, what’s your favorite thing about this novel?

I think the tone is probably the thing I enjoy the most. When I first dove into webnovels I couldn’t get enough and I devoured book after book of smart, serious MC’s who were OP from the first sentence, thought everything through and always came out on top. “Cool” characters, basically.  Eventually I wanted something else and branched out to read other things and when it came time for me to write a story I didn’t want any sort of “cool” MC. I wanted my main character to be a bit silly, impulsive, not to think things through much and stumble about making mistakes. I like that about the novel, it brings out humour and helps make the novel feel light hearted, since no matter how bad things get, the main character is always looking at the positive.

Do you have a favorite character? Or one that you identify with?

The main character, Anthony, speaks in what is basically my voice. It kind of had to be that way in order to write all of his chapters in the first person. So I do identify strongly with him, but secretly my favourite character is probably Tiny, his tamed pet monster. Tiny is essentially a giant gorilla with bat features on his face and he is dumb as a brick and loves to fight.

I have a massive soft spot for some of the side characters as well. Titus the Commander of the Deep Legion is a grizzled hardass who cares deeply for his people and doesn’t shirk his duty. He’s a bit of a favourite as well. It’s really hard to pick between characters…

Fair enough. Also, pet gorilla, huh? I’ve never seen that before! What inspired the idea for your novel?

Being reincarnated in another world is a well established trope and being reborn in another world as a monster is an established sub genre, so the core concept isn’t new and there are a number of examples out there that I drew inspiration from. If I had to name one source it would definitely be “Kumo Desu Ga, Nani Ka!” I just felt that my favourite part of that novel was the start, where she explores the Labyrinth and tries to survive. I thought, “What if the whole novel had been like that?”

Cool! Ok, that’s it for all of my novel questions. Now for the question I ask every author! I’d love to see how you’d finish this sentence: When I looked up, the night sky was full of stars but no moon, and I knew…

That the great eye had closed. Long had the watcher observed and we had frolicked for her delight, but no longer. Now she dreams and our existence is forgotten, faded and grown pale.

Now that is definitely a mysterious answer. Thanks so much for talking with me and congratulations on your release! Is there anything you’d like to say to your readers?

I hope you enjoy the novel folks! If you want something a little different, a little silly and light hearted then you might find what you are looking for in Chrysalis!

Anyways, I hope you learned a little bit about our new author after this, readers. Please do check out Chrysalis here!