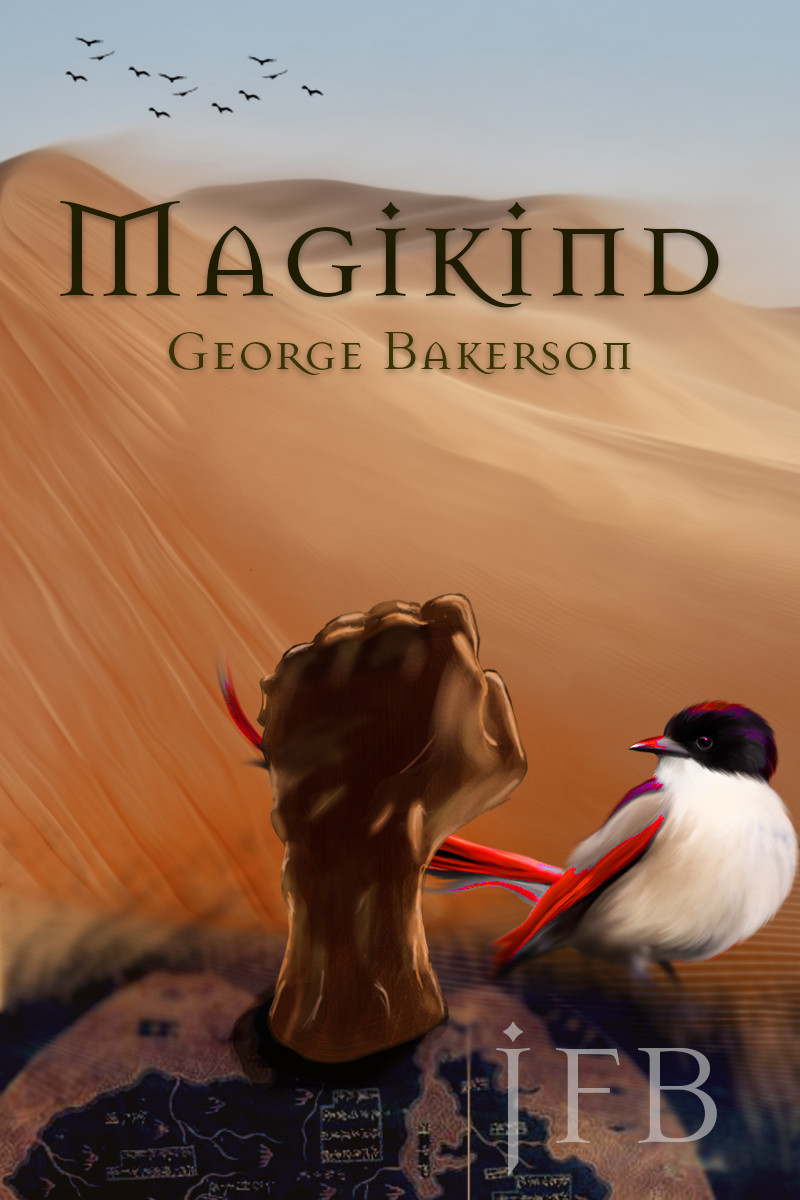 Welcome to another interview. It’s been a bit long overdue, but with the release of a new original, it is about time to do one. Now, you might be wondering why the seat next to me is empty. Well, the author of the new novel is none other than me, George Bakerson. Yes, the interviewer will also be the interviewee. So, let’s begin.

Q: Ok, where to begin? I got my sheet of questions that I would normally ask if I had someone beside me, so I might as well go through it. First off, I need to introduce myself to you guys.

A: I’m sure many of you already know, but I am the secretary of social media, George Bakerson. (Well, George Bakerson is actually my pen name. I’ll talk about that later.) I run the Facebook page as well answer questions on the discord server on a regular basis.

As for more personal details, I am a British mathematics student in my second year of uni, turning twenty-one in March. I took writing as a hobby during a gap year in between college and uni and it slowly became a serious ambition as time went on. I love reading, writing and helping people out, so becoming an author along with the social media guy for CrN was pretty much a no-brainer. Sports are another hobby of mine since I play/watch football (support Liverpool) and do Muay Thai boxing. I would talk more, but I think I’m dragging on a bit heh.

Q: Now that intros are over and done with, next is the big one: my novel, Magikind. What is it about?

A: This is a tough one because I can’t really describe what it is. It doesn’t fit into any set category. There’s a running joke I have with a friend where I have created a new genre called “Chimera” because the bare bone of the story is that it is a Post-Apocalyptic-Dystopian-Scifi-War-LowFantasy type story. But then you have Slice of Life moments, alternate history (it is a story set in our future), some mystery and political intrigue later on etc. It’s just impossible for me to condense it all into a paragraph or two.

However, I’ll try to give the bare bones of what it’s about. Basically, some evolved humans popped up in the near future. Not X-men style evolution, but a simple ability to know what genetics they pass onto our offsprings as well as full control over their own body. These were called “Mages” because of their abilities as no one could explain it and thought it was magic or some sort. Later on, we started selectively breeding and soon the whole population is run by mages. But, there were a group of people who refused to breed with mages and their descendants were the “Manush”.

In the next 3000 or so years, the world is now in a three-way war between Eurasia (EA), Afro-Australian-Alliance (AAA) and The Americas (TA). Manush are thought to be extinct at this point. But one day a manush called Gin drafts into squadron W in Eurasia. No one knows he’s a manush (they think he’s a mage) and so we start our journey through his eyes. We see how the mages live, how they think and fight, along with their evolved abilities through his journey.

I do have to put a disclaimer that although the majority of the chapters are through his PoV, the world does not revolve around. We have multiple character cast and I do switch PoVs from time to time, so if you don’t like Gin personally then it might be a good idea to stick around to see if there’s another character you’ll like and want to see their perspective in this three-way war.

Q: Dammit, I dragged that explanation way too long. Told you it was too complicated to condense in a short briefing! But yeah, that’s just the basics of the Magikind concept. You’ll just have to read on to find what out for yourself what it’s about. Anyway, next question. Hardships and what I’ve faced.

A: Ok, the most difficult aspect of being a writer is the need for consistency. I’m not talking about writing daily, because that is just an awful thing to do especially when you have days when you can’t write. But, it’s more like you need to keep at it. Never think your story is too bad that you drop it on a whim, even if it is subpar. I suffered from that phase. The novel I’m releasing on CrN is my third rewrite.

When I first wrote Magikind, everything bar the core concept of mages were atrocious. Grammar, plot, style, characters, what have you, they were all bad. So I rewrote it; gave it an actual plot, fleshed out a few characters. I sent it to like eight(?) publishers. All rejected me. I got depressed, thinking that was I envisioned wasn’t good enough. I wanted to drop it. But I persevered. I started posting it online as a web novel after rewriting it a second time. Only then, through feedback of the internet, did I realise that some characters needed more oomph, my grammar and style still needed improvement and plot needed just a few minor adjustments.

That’s when I started the third and (hopefully) final rewrite for book one. This is what three years of hard work and three rewrites has culminated into. And this is what I’m sharing with you guys now.

Q: Ah, it seems like I’ve already done part of the next questions: “Any advice for aspiring authors?”

A: Carrying on from my previous answer, basically always try to improve. Also, don’t be arrogant with feedback and critique or too much of a pushover (both extremes are bad). Finally, don’t ever give up if you love the concept of your story but don’t like how you’ve done it. There’s always a chance to rewrite and improve.

Q: Next up is the origin of my pen name.

A: My real name is Abdul funnily enough (though I am still British). But I wanted to give homage to the famous authors and go for a pen name like George Orwell, JK Rowling, George Elliot, George R R Martin etc. Can you see why I chose George as my first name now? The Bakerson part came from the fact that I’m a decent cook and wanted to do a medieval English style surname.

Q: Now for the joke!

Anyway, That’s it for the interview. I know I was very long winded with some stuff in this interview, but I still hope you enjoy reading my fiction as much as I have enjoyed writing it!

The link to the novel is here: Magikind