Cheng Nuo ran away, his speed faster than a rabbit. After being in this world for some time, he had become familiar with the terrain here. He ran through the twisted maze of alleys. The young man couldn’t catch up with him but after he had been running for a while, he heard screams and “bam” crashing sounds.

He had a bad feeling about this and, looking back while he ran, his hair stood on end in shock. The ice snake was chasing after him twenty or thirty meters behind, slithering forward at full speed with its body bent. There was a puff of smoke everywhere it passed, but the youth was nowhere to be seen.

If he got caught, he would either be swallowed or frozen to death! Cheng Nuo was already panting but somehow, he didn’t know how, his legs found the strength to run faster than before.

When he rushed into an alley, unluckily he found the boy standing there with a sword in hand. He turned around but the ice snake was blocking that path. Cheng Nuo quickly glanced at both sides but with a mud wall on one side and a house on the other, he couldn’t escape. Had fate sent him to this world only to get eaten by a snake?

The youth took out a handkerchief to wipe the flour off the top of his head then slowly walked. He said in an icy tone: “Wangcai, you are quite bold. You’ve made me very angry. Since you are so naughty, I will have to chop off your hands and feet and cut off your tongue. Then you will become an obedient human stick.”

When Cheng Nuo heard this, goosebumps broke out in his skin and his chest heaved up and down. Does he think Cheng Nuo would feel sorry now? ****! Even if he went back in time 100 times, he would never let that disgusting worm lay its eggs inside his body!

He threw caution to the winds. Raising his head and folding his arms over his chest, he narrowed his eyes and said: “I, your father’s name is Cheng Nuo. Who the **** is Wangcai?! You’re a ****ing pervert, you little devil! Who doesn’t have ****ing eyes to see that you’re nothing but a waste of air since the day you were born?!”

Although he didn’t usually cuss, he used to play online games and trade insults there to vent his frustration. Since it looked like he was going to die anyway, he’d rather die happily scolding the other person!

The boy immediately became furious. His face turned from green to white, then green again. For a moment, he was speechless with rage. He was accustomed to being treated like a noble and domineering person. When has he ever been treated to this type of verbal abuse? And Cheng Nuo even used words he didn’t understand even though he thought about them for a long time. He didn’t even know how to retort.

In his anger, the youth even forgot to summon the ice snake and simply rushed forward with the intention to stab Cheng Nuo’s throat

When Cheng Nuo saw the tip of the sword coming towards him, he bent over and grabbed a stone beside him. He wanted to kill this psycho child!

Just then, a light arrow came flying like a meteor, diverting the sword’s path, and finally breaking into beautiful fragments of light that gradually disappeared.

Cheng Nuo looked over to the source of the disturbance in surprise and saw Bai Rui standing on a wall ten meters away. His hair was a little messy since he had apparently came in a hurry. He held a longbow made from light energy strung with three light arrows, steadily facing the boy.

Cheng Nuo’s forehead was full of cold sweat. He didn’t believe the boy would listen to Bai Rui so he still held the stone in a vigilant manner as he straightened up. He couldn’t help but wonder what the relationship between Bai Rui and this Bai Zhi guy was.

These two young people had rare good looks. There were a few similarities in their features, not to mention that their hair color and last name were the same. Thinking of some cliché plot development, these two people shouldn’t really be relative…?

Bai Zhi’s sword didn’t strike again but he sneered. He still has flour on his head. Asking him to let this person, who yelled abuse at him, go? Absolutely impossible!

He pointed his sword in a different direction, towards Bai Rui. The boy raised his chin provocatively and smiled: “Ah, you’ve changed a lot. Unexpectedly, you’re willing to ask for a favor on behalf of someone else – are you sure that you’re faster than my sword?”

Bai Rui didn’t answer. His eyes stayed focused on Bai Zhi’s movements but the words he spoke were obviously for Cheng Nuo: “Get out of here.”

Cheng Nuo gritted his teeth. He knows he can’t help here at all, but can Bai Rui deal with such a horrible and perverted enemy? He took a deep breath, slowly drew back, and tried to keep away from that little devil Bai Zhi.

With a sneer, Bai Zhi struck at Cheng Nuo and the ice snake followed suit, climbing up the wall in a zigzag fashion and rushing toward Bai Rui.

Cheng Nuo lifted the stone carelessly in front of his body but it was cut in half by the boy’s sword. Cheng Nuo fell to the ground with a bang. At the same time, Bai Rui loosened his bowstring and accurately shot the light arrows towards Bai Zhi.

After striking that one blow, Bai Zhi quickly turned around and cut down two arrows. The third arrow couldn’t be avoided. The arrow hit the wrist of his sword hand, penetrating an inch into the bone. He has always been spoiled and has never suffered any hardships before. His face distorted with pain and he gnashed his teeth.

Cheng Nuo saw that Bai Zhi had his back to him and immediately seized the opportunity to pounce on him. He threw Bai Zhi to the ground. Grabbing his injured wrist, Cheng Nuo straddled him. Using his left hand, Cheng Nuo punched Bai Zhi’s repeatedly, slamming his head on the ground: “You little pervert, today this elder brother will teach you a lesson! Just because you carry a sword, you think you’re hot ****? Using a snake to bully people?! Hmph!”

Out of the corner of his eyes, he saw that the ice snake was still chasing Bai Rui so he boldly continued to beat up Bai Zhi. Remembering the humiliation he suffered at his hands, the more Cheng Nuo beat him up, the happier he became. He didn’t notice that there was a change in his hands.

Bai Zhi’s face was buried in the soil. At first, he was stunned then he tried to break away many times but the other person was unexpectedly strong. His arm was like steel and each one of his punches hurt terribly.

In the end, he was able to escape since he had trained for a few years and had a good foundation. Struggling, he finally broke free of Cheng Nuo’s steel-like grip and rolled over. Barefoot and barehanded, they wrestled with each other since Cheng Nuo had kicked away his sword.

Cheng Nuo knows that if Bai Zhi stood up he would have no chance of winning so he used his hands and feet to suppress the other person, even grabbing Bai Zhi’s injured right wrist.

Bai Zhi was extremely furious and in such pain that he forgot to use his techniques: “I will dig out your eyes! I’ll chop you up to feed you to the dogs!”

He had lost his weapon and his injured right hand had no strength so he gathered the cold water energy in his left hand to form a sharp, six-edged snowflake then plunged its sharp edge into Cheng Nuo.

Meanwhile, the ice snake was still fighting with Bai Rui, its tail flying around and raising dust. The ice snake’s skin was flexible and too hard for the light arrows to penetrate. Bai Rui was agile enough to avoid the ice snake’s attacks but he couldn’t hurt it. One human and one snake fought, neither one of them standing still even for a moment.

As for Bai Zhi and Cheng Nuo’s close combat fight, neither one of them used many tactics or polished techniques and both of them were injured a lot. Although Cheng Nuo’s arm was stabbed several times by the ice, he managed to beat Bai Zhi’s face until it was black and blue, making him feel elated.

Bai Rui frowned and screamed: “Dodge this!” Pulling out his sword, he struck the ice snake’s tail. The ice snake’s scales were too slippery, making it difficult for the sword to penetrate, and a cold energy flowed up the sword.

Cheng Nuo heard the sounds of battle from behind him and knew that things were not going well. He quickly grabbed Bai Zhi and threw him to the ice snake as a distraction then ran away.

Bai Zhi fell to the ground. With the ice snake’s help, he stood up. His eyes were so swollen that he could barely open his eyes. Looking at Cheng Nuo’s back as the latter ran away, he was in a gloomy mood. Today, he’s not only going to kill the kid, he’s going to destroy this entire place!

But before he could take action, something cold touched his back, ready to stab into his heart.

Bai Zhi’s body went stiff then quickly relaxed. He sneered: “Elder brother Bai Rui, are you going to kill your own brother for lower-class people who are inferior to dogs?” When he said the words “elder brother Bai Rui,” his tone of voice was full of resentment.

Bai Rui nudged him with the sword and calmly said: “If your pet moves, I’ll kill you right away. Take out the pen and paper from your storage bag and set up the blood curse.”

白芷 – Bai Zhi – Angelica dahurica flower, also known as Chinese Angelica. Since ancient times this plant has been used in Traditional Chinese Medicine but the root contains a toxin. Image below. 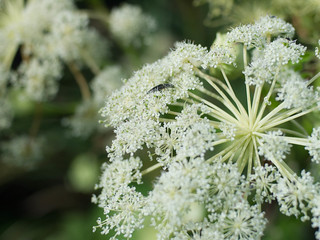 Exciting News!! Creative Novels has teamed up with a game company based from our community (EvoShred) and launched our first mobile game!! Based on the IP of The Villains Need to Save the World?, I Didn’t Even Want to Live, But God Forced Me to Reincarnate!, and Magikind!

We bring to you the puzzle game, Wonders of Fantasy on Google Play!! Please take a look.

To support us, please play, have fun!